I was traveling back from the Chattanooga show yesterday.  I got to spend a couple extra days with my parents!  Always a bonus!  A day late, but not two tips short!!!

I’m working on a little project and needed a mug handle.  Instead of paper piecing with loads of seams, I decided to use an old trick of using a bias strip of fabric and appliqué it on.   (Technique is similar to sewing a bias stem!!).  The curve of the handle was tricky to machine sew.  So, I ended up hand sewing it on.  The steps are listed below with photos.  Bare in mind the section I am sewing it onto is only 1″ x 1 3/4″.  That is TINY!

I cut a bias strip 1″ wide.  Pressed it in half lengthwise.  A funny camera angle makes it look like it is not in half. 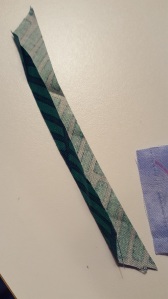 1″ bias strip folded in half…

I drew the handle curve onto the background fabric.

#2- I used a “Frixion” pin by Pilot.  It irons out of most fabrics.  Always test marking tools!  I find the Frixion can leave a shadow where you marked.

The cut edges of the bias strip goes on the drawn line.  Sew with 1/4″ seam.  It was so small I couldn’t get to the curve to smooth it out.  SO,  I hand sewed and adjusted the curve. 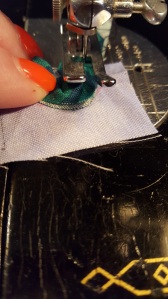 Too tiny of a curve for
A smooth machine
Sewn line 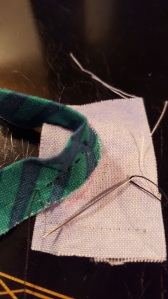 Push the bias strip over the line of stitching and folded edge encases seam allowance.

Folded over into place 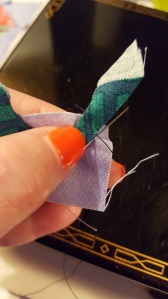 #2 – Don’t be afraid to mix techniques!  The appliqué handle was much easier than paper piecing the curve.

This entry was posted in Appliqué, Handwork, Tips, Uncategorized. Bookmark the permalink.

Leave a Reply to Allison in Alabama Cancel reply

This site uses Akismet to reduce spam. Learn how your comment data is processed.